Expatriates in our own countries – African Elites in Africa! 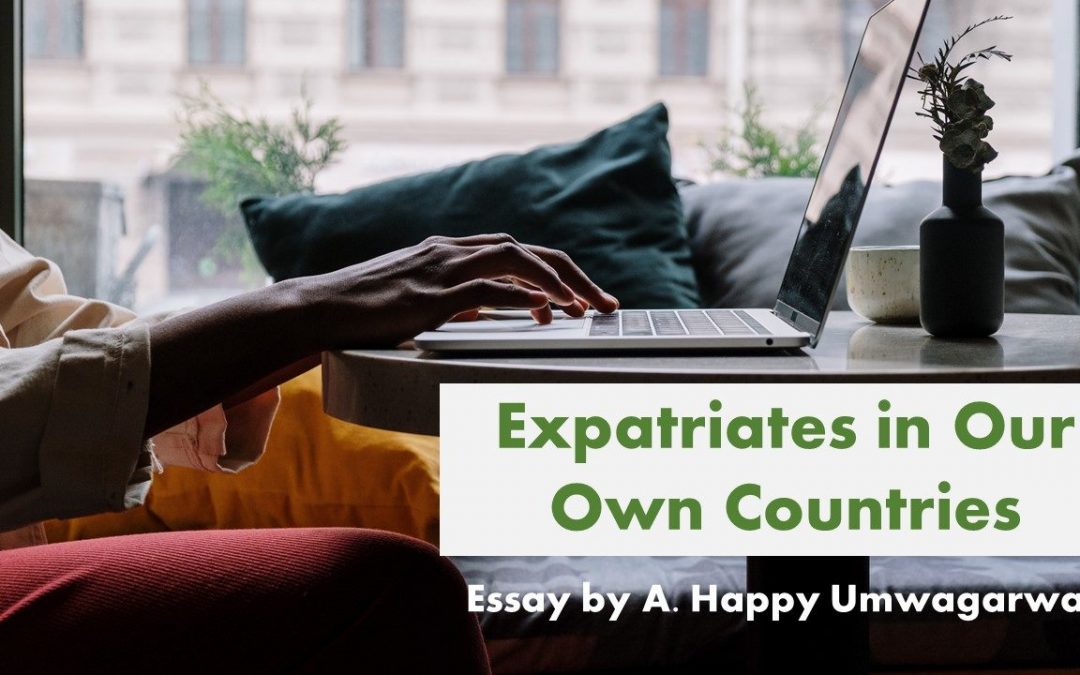 “So, here you are, too foreign for home, too foreign for here, and never enough for both,” are the words of the Nigerian poet, Ijeoma Umebinyuo. This is what was on my mind as I reflected on how elites in my country, Rwanda, and other African countries, live as if we were expatriates in our countries.

On Thursday, after work hours, I rushed to the international school where my daughters studied. The meeting was in English, with a few translations in French. The presenters shared the floor to talk about the curriculum and some new initiatives. For Math, the school followed the Singaporean programme. For literacy, the British programme. For Science, from another country I don’t recall. I raised my hand and asked why one curriculum was not followed for all subjects, instead of picking from different national programmes.

The Canadian Headmaster of the Rwandan-owned international school responded that the school had decided to choose the best from various countries. Interestingly, the only national curriculum they had perhaps not found so useful was the national programme, except the Rwandan language, Kinyarwanda, taught as a second foreign language, after English and French. Rwanda folkloric dance was also introduced as an extra-curricular activity. Even though the student population was mostly Rwandan, they did not sit for the annual national examinations. In high school, they were prepared for the International Baccalaureate (IB). After graduation, they flew to Europe, North America, Australia, or Asia for university. Some come back to Rwanda, but many remain in the West, as workforce for the developed world.

After the meeting, I had an outing with my friends. One of them, Coco, was expecting. She was excited to tell us her visa to the US had been pasted in her passport. She did not trust Rwanda’s medical facilities, and or maybe she wanted to give birth to a US citizen? Mimi, another friend, was boasting about how glorious it was to be with her husband, just the two of them, after they had sent all their kids to Canada for further studies. Their children included a fourteen-year-old, and I wondered if I would ever send my daughter away before her 20th birthday. Another friend, one with a conventional name, Jane, told us that she struggled to get money to send her firstborn to China. The only option she had was to contract a loan from one of the commercial banks in Kigali. She did not want to consider universities in Rwanda because she believed her son deserved better. Her challenge was that she had used her savings to send her mother for medical treatment in India, and could not afford to spend more. This was the norm for many middle-class families in Rwanda. Medical treatment, except for the occasional malaise, was always in foreign countries. Schools for our children had to be abroad, except for the little ones enrolled in private and/or international schools in Rwanda.

On Friday evening, my husband and I were invited to an official dinner gala, to which we expected to meet even high government officials, including ministers and members of parliament. I put on a long black dress and high heels. My lipstick was red, and the perfume, if it did not welcome the charming guy, pushed the old lady with breathing challenges.

I shook hands with the ministers before proceeding to chat with the relatively young Rwandans, who headed technical departments in the ministries. They expressed gratitude to the government for having sponsored their postgraduate studies in the UK, USA, Germany, and other developed countries. Most men had come without their wives. When asked how their families were doing, they responded, “They are getting used to the cold weather,” before talking about how their sons and daughters were getting used to life in Ivy League colleges.

Other stories were about officials who were absent at the dinner gala because they were in Europe, or India for medical treatment. The conversations were also about their preferred banks and insurance companies in the West, and about buying apartments and houses in Canada. These were Rwandans, although most of them had other passports, mostly Canadian and Belgian.

On one table, some people discussed local realities and praised the government for having led us a long way from the ashes of the 1990s to vision 2020. Some people debated the education system, others discussed the medical facilities. But, what struck me the most was that they referred to what was written in foreign newspapers such the New York Times or Jeune Afrique, and not their own experiences. I wanted to ask them why their children studied in international schools, waiting to go to the West, for high school or college, if they really believed in the quality of our education. I did not, because they would grasp what I insinuated.

Was it because I only interacted with the upper-middle-class Rwandans? Yes, it is true that the majority of Rwandans send their children to public schools and use public medical facilities. However, they do so because they have no other choice. In fact, sending children to a public school is regarded as proof the family is relatively poor. Those families consider more fortunate their compatriots who afford private schools and/or abroad for studies.

I’m not from a rich family, and do not befriend only rich people. However, I once tried to make a list of my relatives, friends, and acquaintances who enrolled their children in public schools and/or rushed to public hospitals for treatment, whenever they suspected malaria. Apart from a couple of forgotten aunts, uncles and cousins in the village, there were not many names on my list. Even my driver, whom I paid a monthly salary of less than USD 200 sent his son to a local private kindergarten.

I don’t think it’s because private schools always offer a better education. Most parents I talked to said they chose those schools because of their ability to teach children foreign languages; English or French. Some others found it reassuring when the school had either foreign teachers or Headmaster, without caring much about their qualifications.

The fact that parents have the right to choose between private and public schools is indeed commendable. What’s surprising is that even public servants who sit in strategic meetings where decisions about the education system are made, do not send their children to public schools, especially in kindergarten and primary levels.

Sometimes, I picture a scenario in strategic meetings in Rwanda, or any other African country, where they would be discussing policies on education programmes and/or health systems. I imagine my laughter when they would ask the notes taker or the secretary to tell them about his/her experience in public schools and hospitals. He/she would probably respond that his/her children are not in a public school, but a private school owned by his/her local church. He/she would then add that she goes to the Chinese Clinic, not far from her house, whenever she gets sick. Then, I would wait to see how those officials would make decisions based on their experiences or their wishes, without any idea of how the average Rwandan citizen shall be affected.

Today, some say the world has become a global village. Yes, indeed, the fact that Rwandans are open to the world beyond their country is a good thing. It’s also not a bad thing to have private and international schools. However, sociologists and economists should do research on how Africa’s development efforts are probably thwarted by the fact that African elites seem to be disconnected from their countries’ realities.

Few years after my weekend in Kigali, I got an opportunity to fly to another African country, where I finally work as an expatriate. I now understand better the challenges of expatriates. It’s hard to integrate into a country you’re in only because of a job. Every time the expatriate makes a decision, he/she has to take into account that he/she is not a permanent resident in that country. For example, expatriates often choose international schools for their children, because they believe the adjustment would be more effortless, should they move to another country. Another challenge is that it takes time for expatriates to master the ways of living in the new country of their residence. They shop in high-end supermarkets, not because they want to spend a lot, but because they don’t know how to navigate and shop in local open markets. They are not sure they would find the food items they are familiar with or cannot express themselves in the sellers’ language. The nature of the jobs for which expatriates are hired sometimes dictates the class of people they often mingle with or their neighborhoods. Expatriates somehow lack an emotional connection to the countries they work in. They are there to make money, which they often invest in their home countries, where they are permanent residents.

This made me think that, perhaps, even the African elites who work in their home countries as if they were expatriates, consider more their second nationality countries, often in Europe or North America, as ‘home’. For some others, it’s probably wiser to invest more in the countries to which they sent their children. For others, in order to fit in the elite circles, they have chosen to adopt European-like lifestyle, speak foreign languages and send children to international schools.. Another probable reason might simply be because African elites, who often lived and studied in the West, are in Africa only because of the job opportunities, for which they tend to be more competitive, and not necessarily because they like living in Africa.

African elites should probably not be blamed for behaving like expatriates in their own countries. During the colonial times, children from noble families, or those found to be incredibly intelligent by the colonizers, had more chances to be enrolled in modern schools where they were taught European languages and history. From the post-independence era to today, most African elites earn their degrees from the West. When they come back to Africa, they have more chances to secure high-level jobs or become political leaders, than those who graduated from local universities. However, the big challenge is that they seem to be disconnected from the realities of the majority of the citizens. It as is their understanding of development is having urban cities similar to those in Europe. They invest more in making Africa cities livable for them and attractive to the westerners. That would not be bad if it was extended to all citizens. Unfortunately, it’s not. Only African elites live in modern neighborhoods with 24/7 electricity and clean water. They send their children to relatively good private schools, and fly to other countries for treatment whenever they are unwell. However, the basic needs of the average citizens, for food, health, education, clean water and electricity, remain unmet.

Even though I would never commend it, I can imagine what would happen if all parents were obliged to send their children to public schools, and get medical treatment from public hospitals. Maybe African elites would care more about the quality of our education and the efficiency of our medical facilities. I can imagine if electricity and clean water was distributed evenly among all neighborhoods, in such a way that, since it’s not enough, a household would have it for only a few days a month. Maybe African elites would look into how Africa can efficiently use its waters and waterfalls so that all citizens could have 24/7 access to electricity and clean water.

As long as we, African elites, continue to live as expatriates in our own countries, we shall never meet the majority of Africans’ needs and develop our beloved Africa, starting from the basics.